One of the greatest challenges in validating vehicle electronics is finding ways to conduct virtual tests that will simulate real situations as accurately as possible. Using the dSPACE tool chain, Hyundai MOBIS has been able to implement an approach that combines real and virtual tests for optimizing validation processes.

The market for advanced driver-assistance systems (ADAS) and automated driving (AD) technology is experiencing a period of extremely dynamic growth. Functions that assist drivers or support autonomous driving are becoming increasingly complex, even as they are being implemented in today’s motor vehicles. When designing and validating electronic control unit prototypes, developers have to have detailed, flexible, and versatile development methods at their disposal. A process based on model-in-the-loop (MIL), software-in-the-loop (SIL), and hardware-in-the-loop (HIL) has proven to be quite effective when it comes to simulation and validation. Due to the complexity of control systems and the precise interaction among various kinds of electronic control units and actuators, exact statements on quality and safety in certain areas can only be made with real test drives. However, real test drives are not fully suited for the validation of ADAS/AD functions because many test scenarios cannot be performed in reality due to the high risk of collisions. Therefore, new testing methods are required, that are sufficiently efficient, economical, and safety-oriented for such cases.

Tests Based on Augmented Reality

What is desirable is an approach that combines the realism and integration depth of real test drives with the flexible, almost unlimited possibilities of the HIL method, i.e., a combination of real and virtual worlds. This combination is often referred to as augmented reality or mixed reality, especially in terms of visual perception. Perception also plays a crucial role in the testing of ADAS/AD functions. Since the functions receive their input signals from radar, lidar, and camera sensors, it makes sense to use the sensors to implement the extended test options. This approach means that sensors capture information from a virtual world and use it to control and steer a real vehicle. Therefore, engineers can let a vehicle travel at high speeds in the real world and – at the same time – have a child dart into the street in the virtual world. The object, which is captured virtually, is then analyzed by the ADAS/AD function, which then triggers appropriate action in the real vehicle. Hyundai MOBIS has adopted this approach and implemented it in collaboration with experts from dSPACE and Hancom MDS Inc., the dSPACE distributor in Korea.

Setting Up the Test Environment

The test equipment includes a dSPACE AutoBox real-time system installed in the trunk of the vehicle under test. A complex simulation that includes vehicles, pedestrians, traffic signs, road surface markings, roadside perimeter and structures, etc. is executed on the real-time system. This virtual world serves as the input for the ADAS/AD control units instead of real sensor data. This is achieved by having an ego vehicle – which basically functions as a digital clone of the real test vehicle – travel through the virtual world. The ego vehicle and the test vehicle are equipped with the same set of sensors. The simulation is generated with the Automotive Simulation Models (ASM) tool suite. ASM contains sensor models with which radar, lidar, and camera sensors can be simulated. ASM also enables test engineers to define an environment having any number of vehicles, intersecting traffic, pedestrians walking in any direction, etc. for simulation in real time. The simulation is synchronized with the real vehicle via IMU (Inertial Measurement Unit) and GNSS (Global Navigation Satellite System) so that multidirectional maneuvers can be transmitted from the real world into the virtual world. This results in a closed loop, and the test method can thus be classified as vehicle-in-the-loop (VIL).

VIL tests are conducted at the Hyundai MOBIS Seosan Proving Ground, an area providing ample unobstructed space for testing. A driver and a co-driver are seated in the real vehicle, with the AutoBox stowed away in the trunk. When the vehicle is moving, the co-driver launches test scenarios from which virtual sensor data is fed into the real sensors or the ADAS/AD control unit. For example, these scenarios can include obstacles, intersecting traffic or pedestrians walking onto the road. These are the types of scenarios that cannot be adequately tested in the real world because the risk of dangerous collisions is far too high, or where the metrics involved in a collision (crash point, crash speed) have to be analyzed. Test scenarios are drawn from standardized tests such as those in compliance with EuroNCAP, plus dedicated tests for validating special functions. Scenarios of relevance to AEB (Autonomous Emergency Braking) and LSS (Lane Support System) are used to test implemented ADAS solutions. Since Hyundai MOBIS already relies on several dSPACE HIL systems for validating ADAS in the lab, the tests developed for this purpose can easily be applied to VIL validation in the vehicle thanks to the consistency of the dSPACE tool chain. 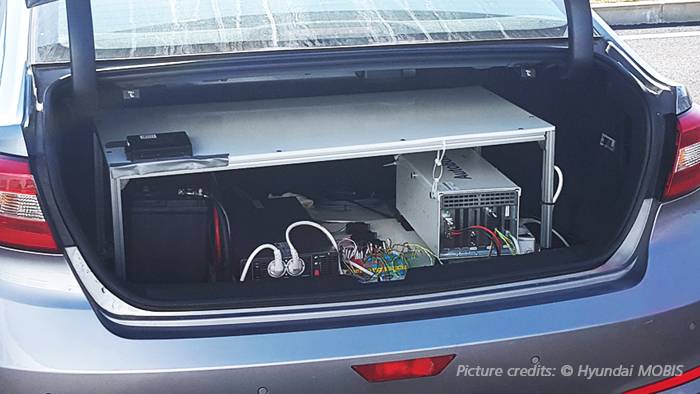 The equipment for the real-time simulation of the virtual vehicle environment is installed in the trunk: The AutoBox (on the right) simulates traffic scenarios and then feeds the data into the real vehicle sensors.

Innovation and Evaluation of the VIL Approach

The VIL test method combines the advantages of real and virtual testing for the purpose of analyzing and validating ADAS/AD functions. VIL supports tests that deliver far more depth and coverage than is possible with conventional methods, while also reducing the complexity and costs involved in comparable real testing (with dummies, several real vehicles, etc.). Furthermore, VIL tests can also be conducted with a combination of series-produced control units and prototype units. There is also no requirement for modeling the restbus simulation – which might not render realistic behavior – because the real behavior of third-party control units is included in the tests. The high degree of maturity and realism of the tests constantly results in more precise data because it is real latencies that determine system behavior, for example. Moreover, the reusability of MIL, SIL, and HIL test scenarios results in an additional efficient validation methodology which is seamlessly and consistently integrated in the established development process. VIL offers all of the advantages expected from a simple, precise, and reproducible testing method. It can be said that the VIL approach enhances the well-known benefits of HIL by including vehicle-specific behavior, and it results in new validation options with very high levels of realism for ADAS/AD control units. 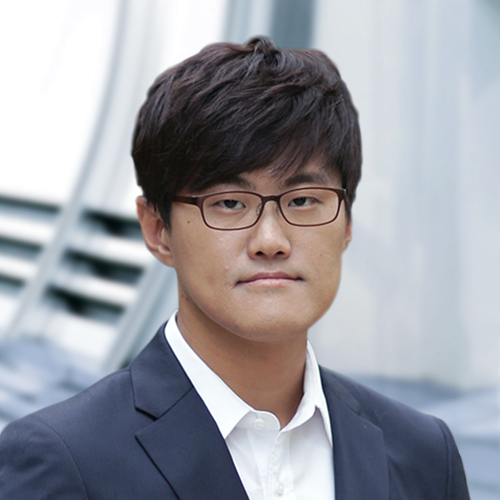